Based on the findings, there are an estimated 37 million people living with HIV (Human Immunodeficiency Virus) worldwide. More than 88% of these patients are of childbearing age, and many of them desire pregnancy and childrearing.

Due to the development of new and effective AIDS medications, also the subsequent use of combination antiretroviral medications, the risk of the HIV transmission from mother or father HIV-positive to embryo has decreased over the past few years to less than 1%. However, because these medications have the potential to be teratogens (which means they could lead to deformities in the unborn child), they must be used under close supervision.

One of the best options in front of HIV couples is the surrogacy for HIV positive couples. Of course, a special technique will be used called semen washing to have a prepared sperm without HIV virus.

Using washed sperm for HIV cases has been an effective application of this method during the past few years. Although there is a theoretical chance of getting infected, no cases of seroconversion in women or fetuses have been documented thus far. 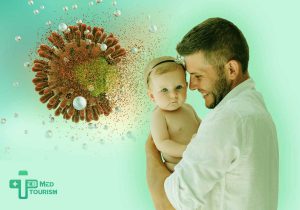 Can a HIV-positive male have kids?

Yes, it is the answer. However, a lot of variables will affect this. At any moment throughout pregnancy, childbirth, or breastfeeding, an HIV-positive person can pass HIV to their unborn child. Antiretroviral therapy (ART) is a course of HIV treatment that can prevent HIV from spreading to your unborn child while also safeguarding your health. On the other hand, sperm washing is very necessary for men before IVF and surrogacy.

In the rest of the article, stay with TebMedTourism to describe all the steps of sperm preparation, including ART and sperm washing, in full and in detail. Sperm preparation is the only way for a man with HIV that want to become a father, which TebMedtourism specialists will perform in the best possible way and with high precision.

The man with HIV should receive this treatment to prepare the sperm for the following stages of fertilization and surrogacy for HIV.

This indicates that the majority of patients will require 7 to 12 months of treatment to achieve a viral load that is consistently undetectable.

To maintain a permanently undetectable status, it is imperative to take every pill as directed each day.

The term “antiretroviral therapy” refers to HIV treatment (ART). A daily HIV treatment regimen, or a mix of HIV medications, is taken as part of ART.

You should pay attention to this point that ART is advised for all HIV-positive individuals and HIV medications help patients with HIV live longer, healthier lives, but ART cannot be an absolute cure for HIV. It maintains a permanently undetectable viral load, and for the timely effect of this treatment. After regular treatment, you can be sure that the sperms for the next steps and the process of surrogacy for HIV-positive couples are prepared. Please pay attention to this point: taking every pill as directed each day is imperative.

This is a wise move any time two people are considering getting pregnant. STIs can make it more likely that your HIV-negative partner will contract the disease.

You should know more about viruses that associating with HIV. So these tests are precisely necessary and Do not avoid giving them.

Since most patients will require 7 to 12 months of treatment to achieve a consistently undetectable viral load and on the other side, Tests are time-consuming. Also if you want surrogacy for HIV-positive couples, all procedures take a lot of time and you have to adjust the time!

Can HIV viruses be transmitted through surrogacy?

Of course, one of the most important questions about getting surrogacy is; Can HIV viruses be transmitted through surrogacy?

It is exceedingly improbable that a surrogate would get HIV from the intended parent she is carrying for, to give you a quick answer. Thousands of children have been born to people living with HIV through surrogacy, despite the fact; that it can be medically feasible that a surrogate could become HIV positive because of surrogacy for HIV-positive couples.

One of the most important techniques that will be used when a man has HIV is Sperm washing. This treatment method that is known as semen washing prevents HIV transmission and leads to pregnancy in HIV couples.

About semen washing, its advantage and disadvantages stay with us. 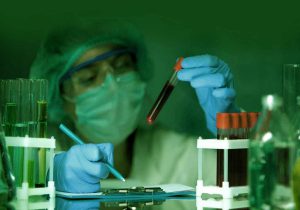 What is HIV and How can it be transmitted?

Before discussing surrogacy for HIV-positive couples, it is important to discuss how HIV can be transmitted and the ways of Infectious viral transmission that compel you to choose surrogacy.

HIV can make the immune system so frail that it is unable to effectively fight off some illnesses.

AIDS is not the same as HIV infection. The most severe form of HIV infection, known as AIDS (acquired immune deficiency syndrome), occurs at a time when the immune system is most vulnerable, and a person experiences a number of distinct symptoms.

HIV infection can only occur through direct contact with particular body fluids from an HIV-positive individual who has a detectable viral load. The subsequent fluids:

The answer to this question directly comes back to the responsible woman. It is exceedingly improbable that women with HIV who are receiving treatment and have a stable, undetectable viral load will pass HIV to their unborn child during pregnancy and childbirth.

When a woman is receiving antiretroviral therapy, and after the test has a specific range (below 50copies/ml) there is a one in 1,000 risks that she may transmit HIV to the unborn child during pregnancy and delivery.

Since there is a 1-2% chance of transmission to the baby, many doctors forbid patients from breastfeeding for 12 months. After all, according to HIV-positive mothers’ concerns, specialist doctors suggest surrogacy for HIV-positive couples.

Surrogates for men with HIV

The first question that comes to mind of HIV positive men is, “Can an HIV Positive Man Father a Child?” the answer is yes.

Nowadays, by progressing genetic science and biological technology and producing centrifuges, HIV-positive men can welcome their own babies.

In this article, with a scientific perspective that makes the reader of the article more at ease, we will describe how the progress of technology leads to sperm washing methods, a highly effective procedure that could be effective in destroying the HIV viruses.

The main point you should focus on them is who has the primary responsibility for transferring HIV viruses. According to DNA and highly advanced tests, HIV viruses don’t stick to the sperm but are in seminal fluids. So by utilizing centrifuging, the viral load could be decreased to non-detectable levels.

Now, after cleaning the sperms, everything is ok for using healthy sperms in IVF procedure and embryo transferring to the surrogate mother because there is no danger to the Surrogate after sperm washing!

But how does sperm washing work? Read more to discover what a bright future awaits HIV positive men as technology advances.

How does sperm washing work?

Semen washing removes spermatozoa and other potentially harmful components from surrounding seminal fluid, which can be used in assisted reproduction.

The semen is washed using a centrifuge. The centrifuge is a device that spins at high speed to separate the sperm from the semen in a given semen sample. Sperm are then purified in solution twice to remove other unwanted substances, including HIV.

Usually, the time allocated to sperm washing is about 20 to 40 minutes.

TebMedTourism Physicians recommend this method, and finally, HIV tests women as surrogates and infants at a time point after semen washing and testing to ensure that they are free of the virus. So you can apply for surrogacy for HIV-positive couples safely.

Experienced and skilled doctors in the field of fertility are cooperating TebMedTourism. So go through the process of your treatment with us safely.

With advanced technologies, we can see “what HIV-infected sperm looks like,” but for the other time, we will come back to the previous paragraph:

Please pay attention that the viruses couldn’t stick to the sperm. They are in a semantic fluid, so there aren’t appearance changes in the semen. Still, according to some articles, a scientific glance shows an HIV extracellular RNA has been detected in most spermatozoa.

In other words, you couldn’t find any sign of HIV viruses in semen, and sperm looks common sperms.

Can sperm washing be effective?

Semen washing appears to be an effective way to reduce the risk of transmission in HIV-discordant couples who want to conceive a child. Whether or not a male partner is currently infected with HIV does not seem to make a significant difference. 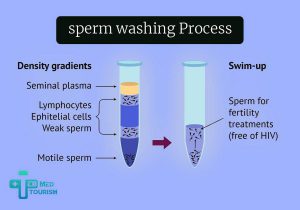 TebMedTourism has a deal with Centers that can handle this procedure professionally and expertly. High technological hospitals with the best equipment and facilities are developed and apply comprehensive medical examinations and treatment processes for HIV patients.

Advantages of sperm washing for HIV!

Without sperm washing, putting semen into a woman’s uterus during IUI or IVF can lead to difficulties. Whether she is your wife or surrogate, her life of them will be at risk.

In addition, Sperm washing can remove sperm with low motility or dead sperm and contaminants that may cause difficulties. When poorer quality and dead sperm are removed, more treatments will be effective since the remaining sperm are quicker and healthier. Semen washing removes factors that are responsible for HIV, and before that, we speak about that.

How much does sperm washing cost?

Many fertility centers for semen preparation and services offer a range of prices from $250 to $700, but we know that before that, the patient should be treated with ART.

TebMedTourism, we choose the best treatment for HIV couples applying for surrogacy at the lowest cost, and we will help and support them until the end of the surrogacy process and place a beautiful and healthy baby.

FAQ about surrogacy for HIV

Can HIV positive do surrogacy?

Of course, yes, why not! But there are special considerations. Since women with HIV who are receiving treatment and have a stable, undetectable viral load will pass HIV to their unborn child during pregnancy and childbirth, a surrogacy procedure will be suggested to her. On the other hand, if her partner is HIV positive, our suggestion is sperm washing. An advanced treatment that will decrease viral load to an undetectable level.

Can HIV positive men have children?

Of course, they can. Today’s world is of advanced technology and second progress in many fields, especially medical areas. The sperm washing procedure is one of the advanced techniques that help HIV-positive men welcome their healthy babies. For HIV-positive women, after medications are on, the HIV-positive female will be referred to the surrogacy process.

Is it safe to be a surrogate for HIV- positive couple?

After all of the above information, the answer is yes. Means that a prepared sperm after ART and sperm washing process and a healthy egg donor have not any risk for surrogate!

Can HIV be transmitted via IVF?

The purpose of IVF (IN Vitro fertilization) treatment is to help with fertility. During this treatment, mature eggs that are collected will be fertilized by sperm in labs.

So before the process of fertilizing, the health of both eggs and sperms have checked. Therefore, the answer to the question, Can HIV be transmitted via IVF, is No. There aren’t any findings that after ART and sperm washing as requirements before pregnancy and IVF for HIV couples that intend to be parents and all of the processes of treatment completely performed, HIV has been transmitted!