Caves in Iran have a unique value both for the country and the whole Middle East and the world. Most of them have not yet been fully investigated, and there are still secrets hidden in the dark labyrinths of caves. From our article, you will find out the most popular caves in Iran that are open to tourists. 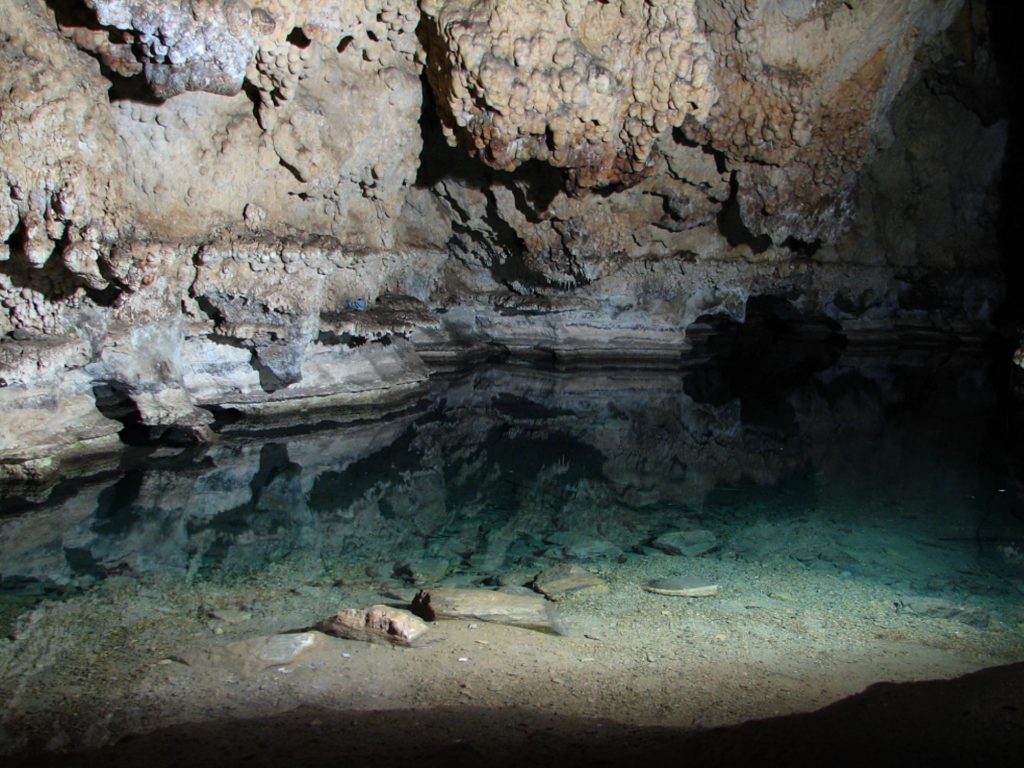 With a network of channels, lakes, and watery passageways spreading out over several kilometers, Ali Sadr Cave (غار علی صدر) is one of the largest subterranean water complexes in the world. Stable since its formation millions of years ago, the sunless grottoes feature clear waters, fantastical rock formations, and stalactite-covered ceilings soaring high overhead.

Unlike many other aquatic caves, the body of water in Ali Sadr is not a flowing river, but rather an extensive, web-like lake seemingly fed by spring waters from nearby Sarab Cave. Visitors to Ali Sadr are conducted to an underground wharf where they board boats that take them gliding silently through this chain of flooded chambers.

Colorful, glittering geological structures cover the tunnel walls above and below the surface of the water, which is clear enough to provide visibility to a depth of five meters. Tight, winding passageways branch off endlessly from one another, or open up into massive rooms like the Wedding Room (also called the 1000 Stalactites Room), the Island (which sits at the center of the complex), and the 600-meter-long Freedom Hall (the largest chamber in the network).

Prehistoric paintings, pitchers, and jugs found onsite indicates that the cave was inhabited by early humans starting 12,000 years ago. An additional entrance to Ali Sadr was constructed during the reign of Darius I (521-485 BCE), but at some point after that the cave was apparently forgotten, being rediscovered only in 1963. Since then it has been explored by mountaineers and geologists from both Iran and abroad. Its known extent at this point stretches over 11 kilometers, with its longest passage mapped thus far running almost the same distance.

The standard tour takes visitors on a 2100-meter journey through Ali Sadr Cave, 1470 meters of which is covered by boat—making it one of the longest underground boat trips in the world. 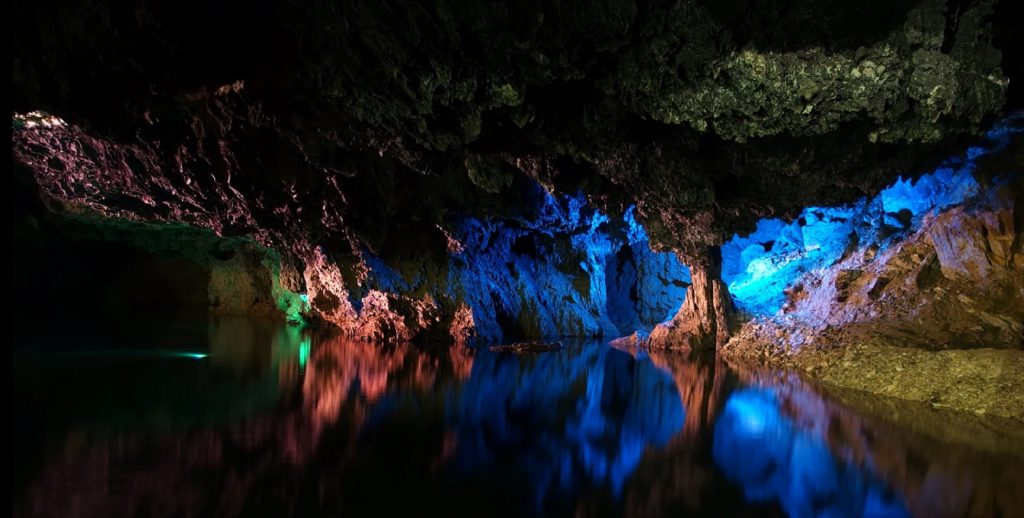 Ali-Sadr cave is located 100 km from the city of Hamadan. It is considered the largest cave on the territory of Iran. Moreover, Ali-Sadr is one of the most popular natural attractions in the country. To attract more tourists, an underground cafe was opened in the cave.

Ten-thousand-year-old Ali-Sadr is a huge and ancient cave. The rock paintings and dishes found in it prove this fact. With a length of 11 kilometers and ceilings of 40 meters high, the cave has a unique infrastructure with underground lakes and tunnels. In the cave, the visitors can move mainly on boats. 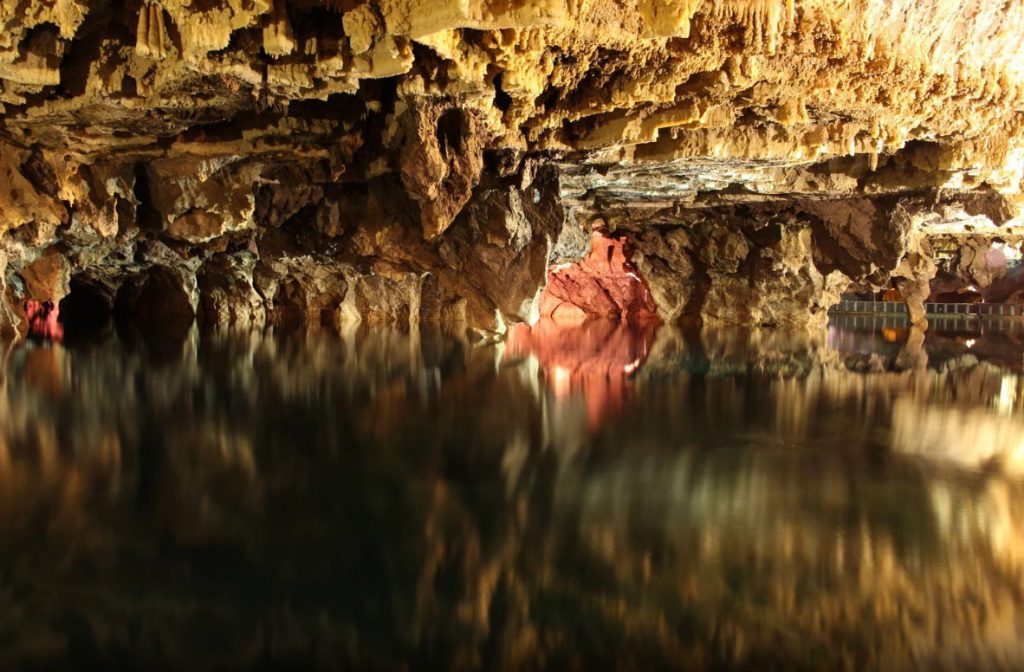 The cave of New Ai-Sadr has been recently discovered. Several years ago, one of the shepherds discovered it near the village of Sheikh-Patawe, the province Ali-Sadr-Koghgiluy. After studying the cave, scientists established its age – 135 million years. The cave was included in the list of cultural heritage of Iran, and it became a popular destination.

This cave is among the famous caves of Kermanshah. It is located on Shahoo Mountains in the serene scenic valley, north of the outskirts of the Javan Rood. The cave opening is located at a height of 1660 m. undefined above the sea level and forms an area with a steep incline.  the end of this large area, the main branch of cave begins with smaller openings. From the left side of the main branch, a small stream falls into the stone depths. In this part, the cave divides into two branches. undefined The left branch is no more than 8 m. in depth but the right branch has a large underground water reservoir. After passing this swamp there are others that are 60 m. undefined in length and its ceiling touches the ground. 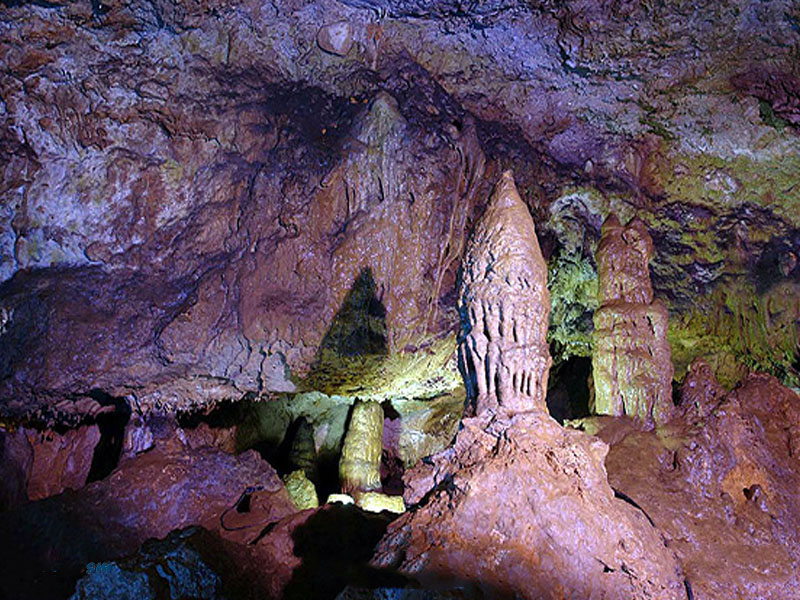 In 25 km from the city of Pave (Kermanshah province), there is another cave – kavat. It is unique due to its underwater waterfalls and rare species of bats. Numerous expeditions were conducted here, which led to valuable archaeological finds – bowls, dishes and coins of the Sassanid dynasty.

The total length of the cave is 2.7 km, but only a small part is open for visitors – only 500 meters. The most exciting in the cave are beautiful waterfalls that add mysticism to the atmosphere.

This seven-story and thirty-million-year old Cave is located between Zanjan and Garmab town. 165kms from Zanjan and 5kms from Garmab.

Khatale Khor means the sun’s position or from where the sun rises.

The existence of nature’s carvings through million years in the beautiful form of stalagmites and stalactites in the corridors and halls is showing off and adds to the beauty of the Cave.

In some corridors, animals’ skeletons were found which are not similar to nowadays animal and probably belong to the extinguished generations of the past ages.

It’s good to stay in Zanjan’s hotels plan one day trip to Cave and back to Zanjan again, will take about 6 hours ( 2 hours driving there, 2-3 hours visit the Cave, 2 hours’ drive back to Zanjan) 70-100usd round trip by Taxi. 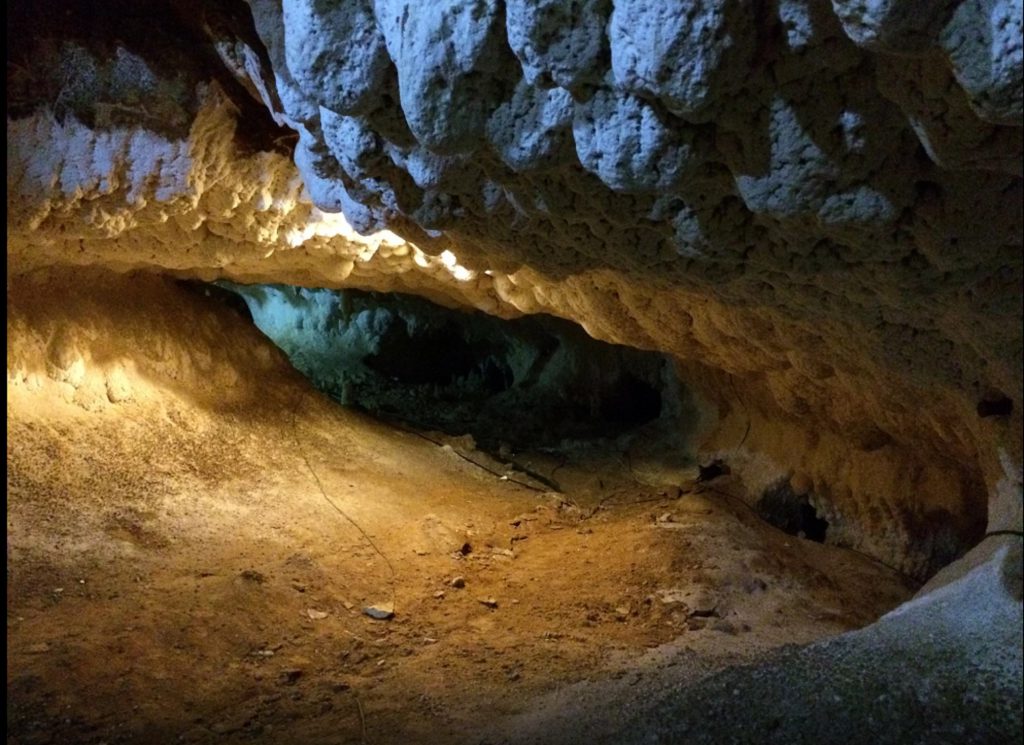 Temple of Hercules or Karaftu cave

The Karaftu Cave is, in fact, a series of cave entrances in the cliff face near the town of Karaftu. The originally natural caves have been modified by the local inhabitants over centuries. The first of these modifications were probably carried out by members of the Arsacid dynasty more than 2,000 years ago. There is an engraving in Latin on the wall at the entrance reading: Where Heraclitus dwells the evil cannot enter. This has given rise to the theory that the cave may have been the temple of the Greek god Heraclius, the well-known demigod known today as Hercules. Later it was used as a temple by members of the Mithraism cult, the sun worshippers.

There are numerous remains from various times, and the cave was obviously used continually as recent excavations have revealed pottery from the Arsacid, Sasanid and Islamic eras. Originally the entrances, high above the valley floor could only be reached by using ladders or ropes. The locals always used the rather inaccessible caves in times of danger as a hideout, and, until the present time, it was known as Karaftu Castle. The cave has been visited since the 19th century by explorers, including Orientalists such as Jean-Jacques de Morgan (1857-1924) and Sir Henry Rawlinson (1810-1895). They visited the cave and even mapped it.

The cave entrance is between 20 and 30 meters up, in a south-west facing cliff face. Today a long staircase leads up to the entrance and the other cave entrances are secured by railings. The cave is described as having four levels or floors, and a total length around 750m. Recent developments at the caves have included the construction of a new road, parking area, and signage. There are wooden walkways and steps connecting the many cave entrances.

Behind this artificial cave lies a large, and very spectacular, natural phreatic cave with numerous passages and large chambers. he most recent development has been the installation of lighting throughout the main sections of the main cave, and it can now be traversed for over 600m to a large chamber. 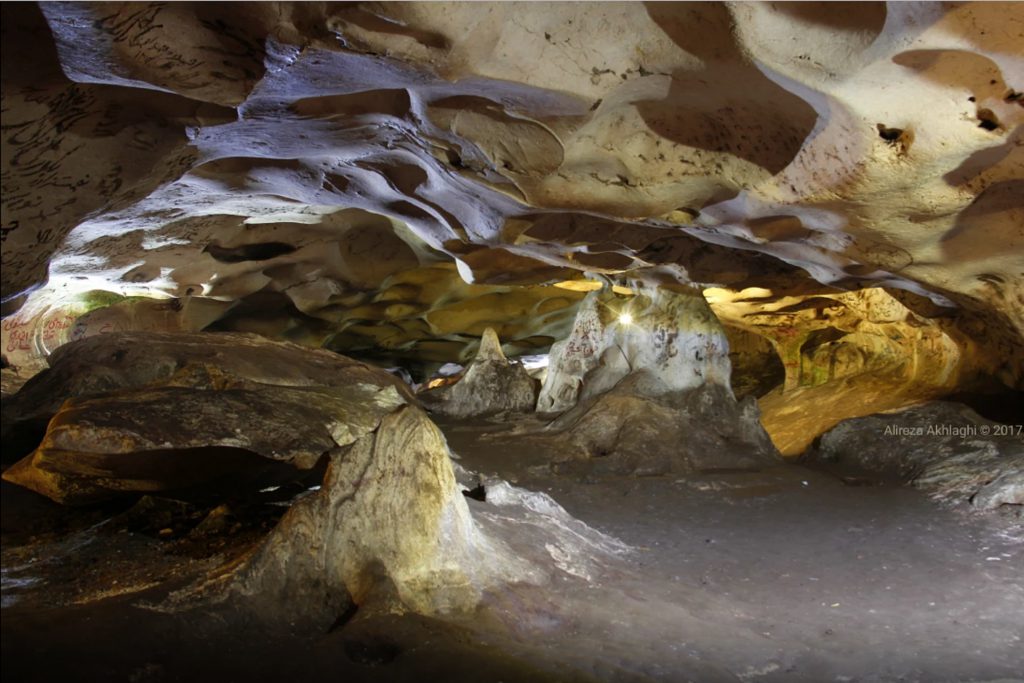 Saholan Cave is located 43 km southeast of Mahabad in West Azarbaijan Province, Iran. This limestone water cave has two main sections, a waterway which visitors ride on a boat to discover the amazing attraction of it and a dry part which tourists walk up through the chambers and corridors to visit the hidden undergrounds of this beautiful natural cave.

The name is taken from the nearby Saholan Village, the word “Saholan” in Kurdish means ice and freezing because the climate in the area is very cold in winter. This cave is also called the “pigeon or dove nest” cave because there are many pigeons living inside, they lay eggs even within reach of visitors so closed that visitors can touch them, doves and bats are the main residents of Saholan Cave.

The cave has two entrances, the tour starts from the first entrance with a big jetty chamber, a 200m water trip by boat to the main chamber and it continues in a series of dry corridors and out through the second entrance, the second entrance shows a history of human habitation in the past, black soot smoke on the walls and ceiling shows evidence of long-term use of campfires in old ages.

Besides this natural wonder, there is some historical evidence of old ages too, some paintings on the walls of passages and corridors belonging to Parthian dynasty. This tourist destination is cool in summer and freezing in winter.

Many sources indicate that this is the second largest water cave in the country after Alisadr in Hamedan. Sahoulan is a very interesting natural target especially for foreign tourists and Mt Damavand climbers, a recommended destination to visit the beauties of Iran nature besides their climbing and other outdoor. 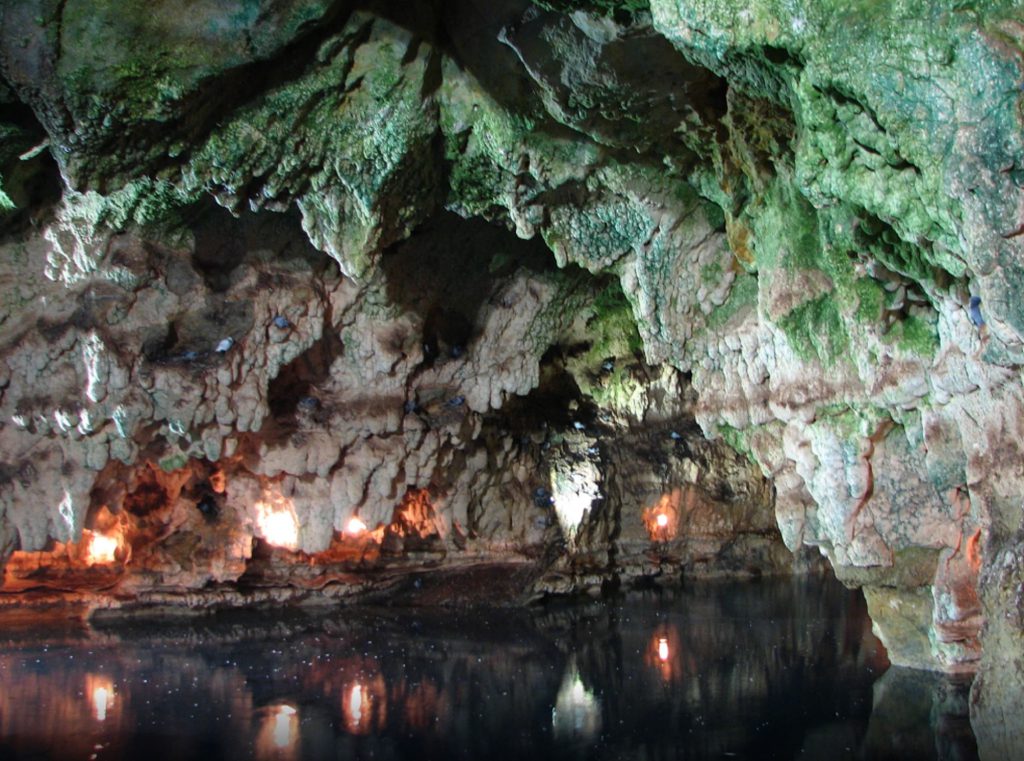