The palace’s highlight is the Main Halls, including the dazzling Talar-e Ayaheh (Mirror Hall). Built between 1874 and 1877 the Peacock Throne was housed here before it was moved to the National Jewels Museum. It was used for the coronation of Mohammad Reza Shah in 1967 (25 years after he came to power) and royal weddings. Today it and two adjoining halls house gifts, including a set of green malachite table decorations from Russia and fine porcelain from France, Germany, and the UK. 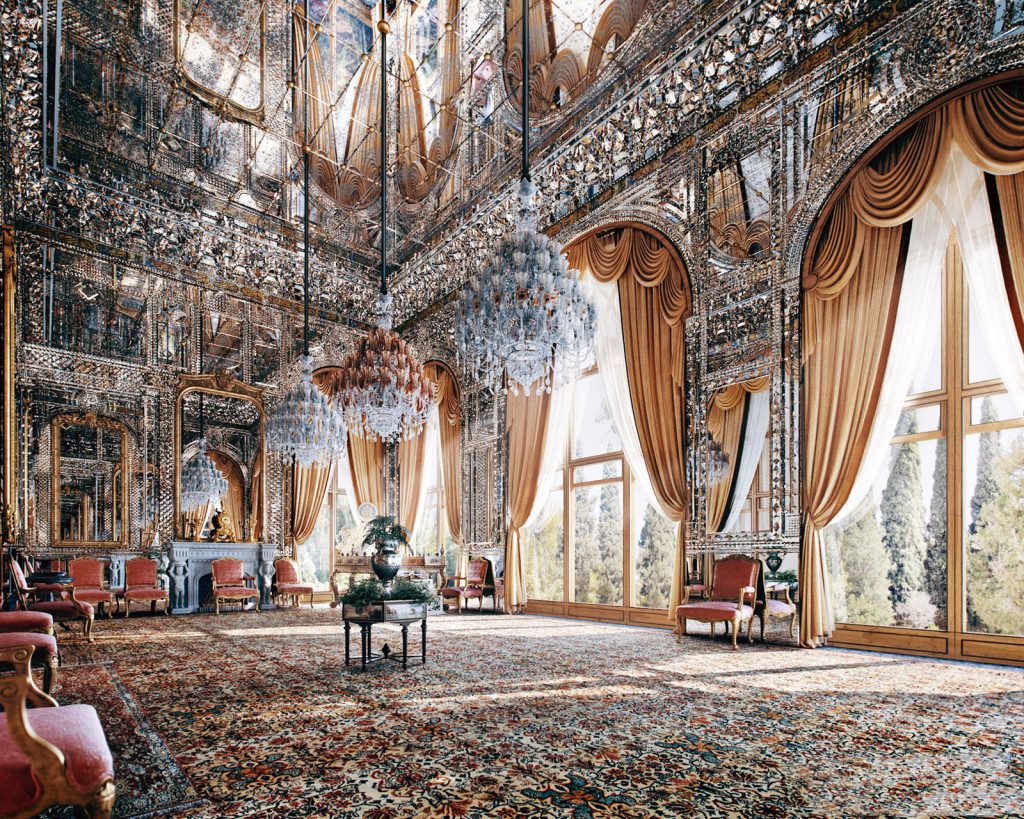 At the east end of the garden, the imposing Shams-Al Emarat (Edifice of the Sun) blends European and Persian architectural traditions. Born of Nasser al-Din Shah’s desire to have a palace that afforded him a panoramic view of the city, it was designed by master architect Moayer al-Mamalek and built between 1865 and 1867. The only part of the building’s ground floor is open for view, showcasing yet another sequence of mirrored and tiled rooms.

Sprawling across the foothills of Darband, this estate was a summer home to royals since the Qajar dynasty, although it was the Pahlavis who expanded it to the site you see today. Covering 110 hectares and comprising 18 separate buildings, it will take you a good three hours to see everything. For a glimpse into the luxurious life of the shahs, don’t miss the extravagant 54-room White Palace, built in the 1930s. The more classical-looking Green Palace dates from the end of the Qajar era

Other highlights include the eclectic Nations Art Museum, found in the basement of the White Palace, and the well-curated Fine Art Museum. And for those whose tastes run to particular subjects, there are exhibitions covering royal vehicles, military paraphernalia, royal costumes, and even royal tableware. The museum-complex grounds are also a pleasant place for strolling.

All tickets must be bought at either the front gate near Tajrish or at the northern entrance from Darband; entering from the north makes sense if you’ve previously spent the morning and had lunch in Darband.

Ask at either ticket office for the useful English map. There’s a minibus that shuttles regularly from the front gate, pausing at the White Palace on the way up to the Green Palace, then back again.

For refreshments, there are two pleasant but unexceptional cafes inside the grounds.

To get to the front gate, walk or take a taxi 1.5km northwest from Tajrish Sq, beginning on Ja’fari St and turning left and right (ask anyone for ‘Musee Sa’d Abad’). Or go to Darband and enter from there. 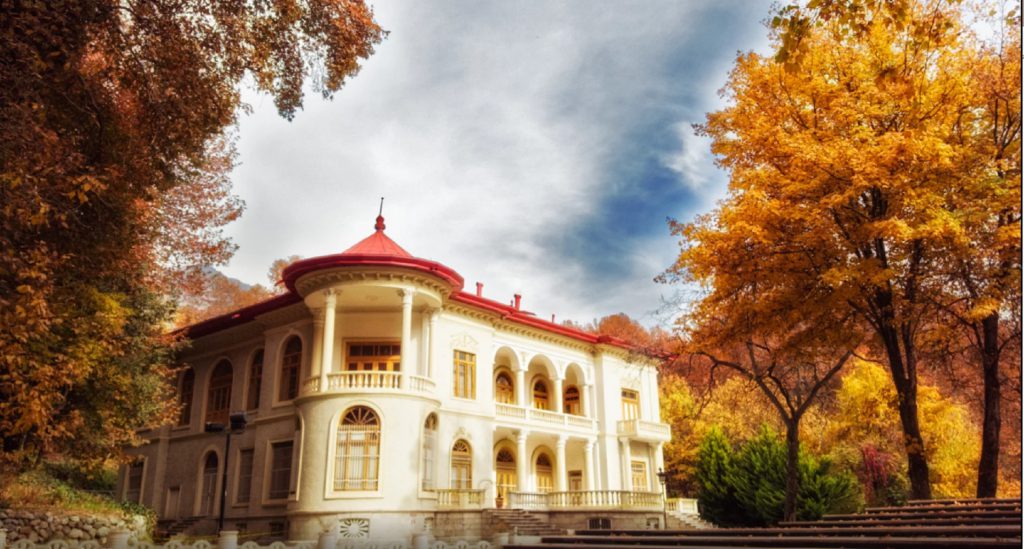 The maze of bustling alleys and the bazaris (shopkeepers) that fill them make this a fascinating, if somewhat daunting, a place to explore. Despite being known as the Grand Bazaar, most of the architecture is less than 200 years old and pedestrian, although there are some gems to be found. Visit in the morning, when business is brisk but not yet frantic – later in the day, the chance of being run over by a piece of fast-moving haulage equipment is high.

The bazaar’s covered stores line more than 10km of lanes and there are several entrances, but you get a great view down a central artery by using the main entrance facing the square Sabzeh Medyan. The warren of people and goods is a city within a city and includes banks, a church, a fire station, and several mosques, most notably the impressive Imam Khomeini Mosque, and the ornately decorated Imamzadeh Zeid, a shrine to a descendant of the prophet.

Most lanes specialize in a particular commodity: copper, paper, gold, spices, and carpets, among others (note though you won’t find fresh food here). The carpet, nut and spice bazaars might be the most photogenic, but the lane of stores selling fake designer labels (literally labels, not clothes) also catches the eye.

In our experience, there are two ways to visit the bazaar. One is to simply wander the labyrinth of streets and alleys, taking whichever turn you fancy and going with the flow. If you get lost, remember to walk uphill to the main exits on Panzdah-e Khordad Ave.

Alternatively, allow yourself to be befriended by one of the carpet salesmen. Tell them what sections of the bazaar you’d like to see and they will lead you. When you’re done, they will expect you to visit their carpet shop, drink some tea and view a few rugs – which in itself can be fun. 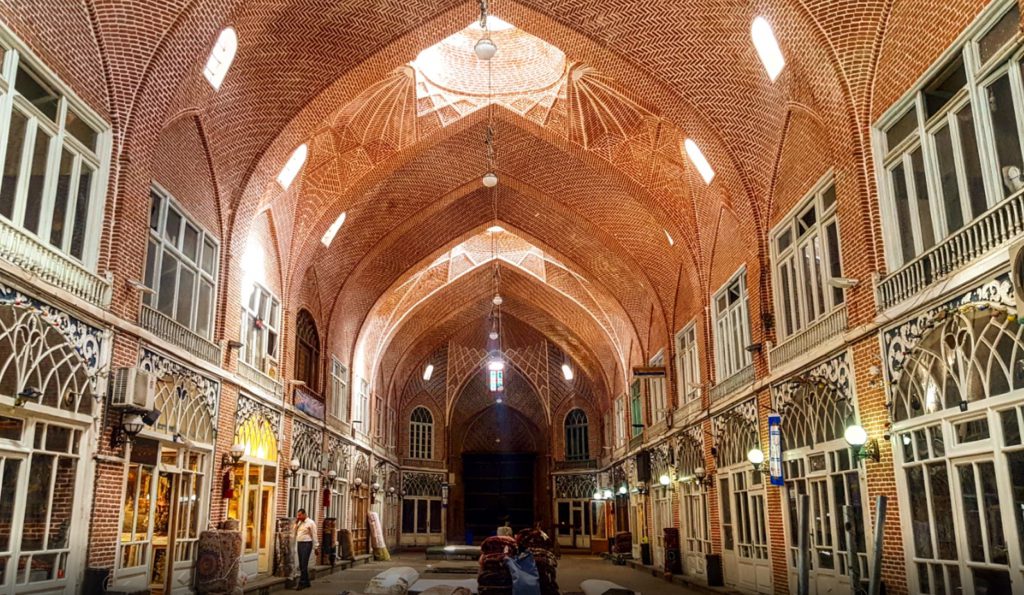 In the Alborz foothills is the palace where Shah Mohammad Reza Pahlavi and his family spent most of the last 10 years of royal rule. It’s set in 5 hectares of landscaped gardens and has six separate museums, the best of which is the elegant 1960s Niyavaran Palace, with its clean lines, opulent interior, and sublime carpets. Tickets must be bought before entering at the main gate. There’s also a pleasant cafe with outdoor seating.

Apart from the Niyavaran Palace, you can also explore the Sahebgharanieh Palace, where the Shah kept his office; the Ahmad Shahi Pavilion, Reza Pahlavi’s residence when he was crown prince; and the Automobile Museum, which houses a small collection of stately vehicles. Note that at the time of writing, the Sahebgharianieh Palace was closed for renovations.

Farah Diba’s tasteful touch is also evident in a number of the museums, including the art-filled Jahan-Nama Museum & Gallery, and the Imperial Library Museum, once her exclusive domain.

To get here, take a shuttle taxi or bus east of Tajrish Sq, and ask to be dropped at Shahid Bahonar Sq, near the museum entrance. 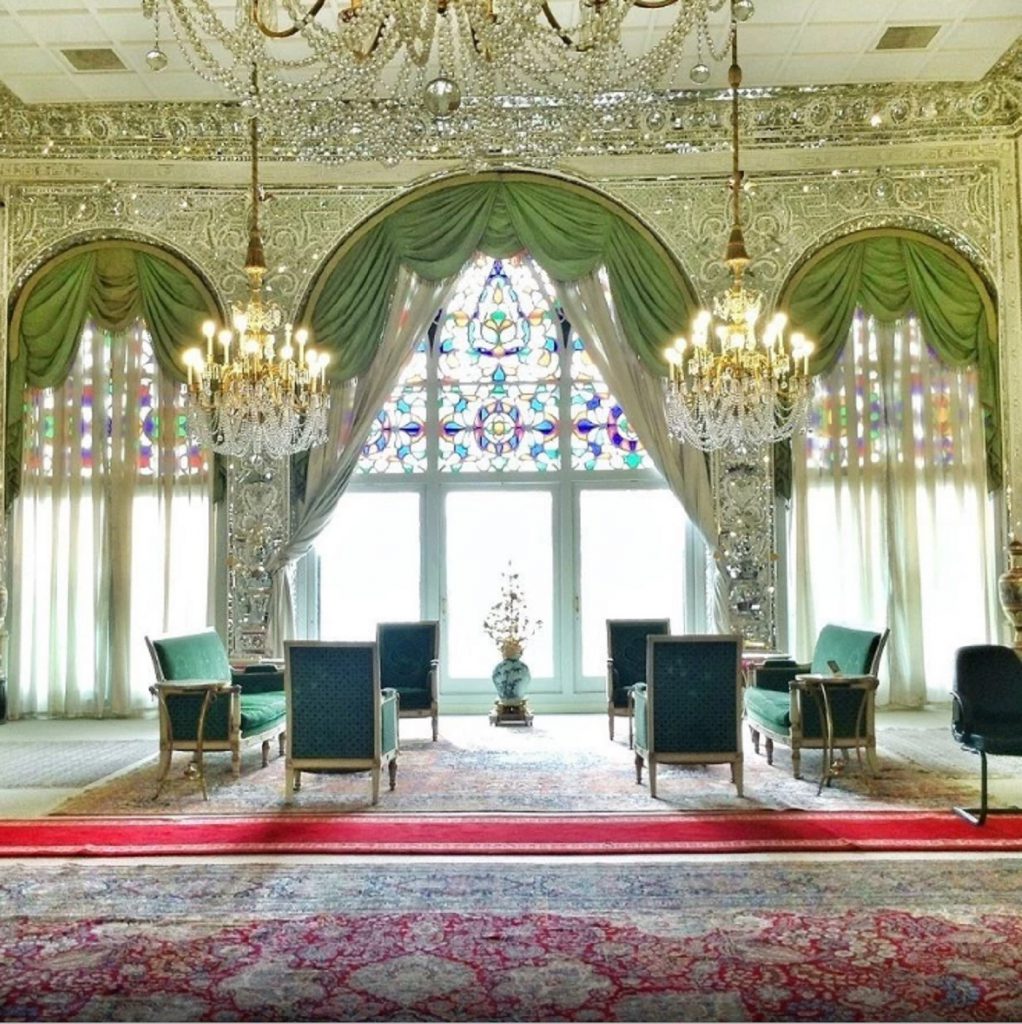 This epic-scale museum, on a landscaped site of 21 hectares, is dedicated to the Iran–Iraq War, a bloody eight-year conflict that claimed a million lives. The main building consists of seven halls that commemorate the war’s martyrs and run you through the history of the conflict in forensic detail. It may sound harrowing, but it is, in fact, a fascinating and imaginative response to a deeply scarring episode in modern Iranian history.

At times the displays swerve into the surreal, such as the section that depicts the glittering vision of heavenly paradise the soldiers (many no more than teenagers) were sent to their deaths believing, and the one that places you at the heart of an aerial bombardment complete with sensory effects.

Outside, huge rockets and tanks flank the Garden Valley, at the center of which is a 6000-sq-meter lake where, in the summer months, a fountain and laser-light show plays. The complex also includes a separate silver-sphere building where you can view a 15-minute film shown on a panoramic screen that depicts the besieged town of Khorramshahr before, during and after the conflict. Near the exit to the subway station is a replica of the Khorramshahr mosque covered in yellow and turquoise patterned tiles. 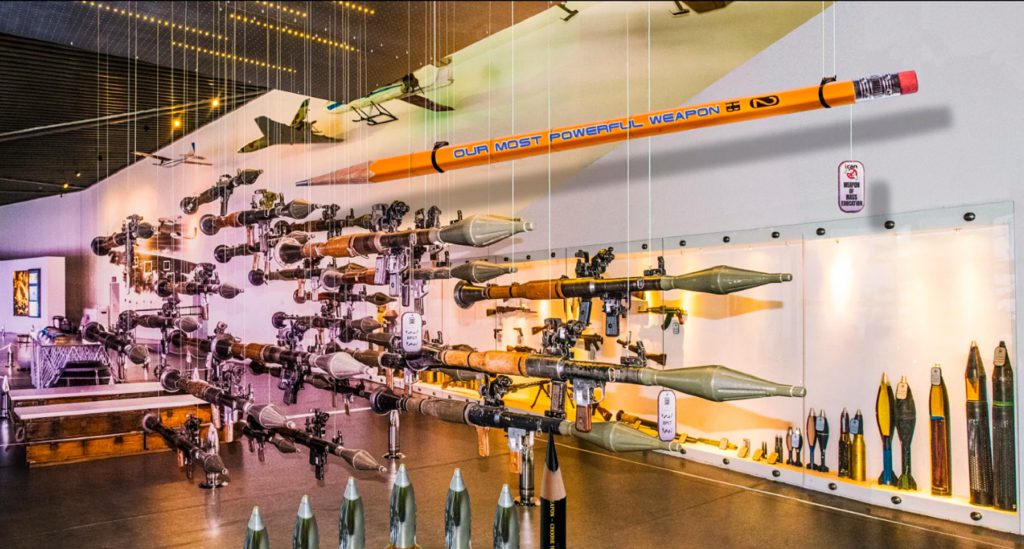 Owned by the Central Bank and accessed through its front doors, the cavernous vault that houses what is commonly known as the ‘Jewels Museum’ is not to be missed. The Safavid, Qajar and Pahlavi monarchs adorned themselves and their belongings with an astounding range of priceless gems and precious metals, making this collection of bling quite literally jaw-dropping. Star pieces include the Globe of Jewels and the Peacock Throne.

Pick up a guidebook at the shop as you enter, or take one of the regular professional tours in English, French, German or Arabic – it’s included in the ticket price and worth waiting for as there are few descriptions in English.

Cameras, phones, bags, and guidebooks must be left at reception. Be careful not to touch anything or you’ll set off ear-piercing alarms. 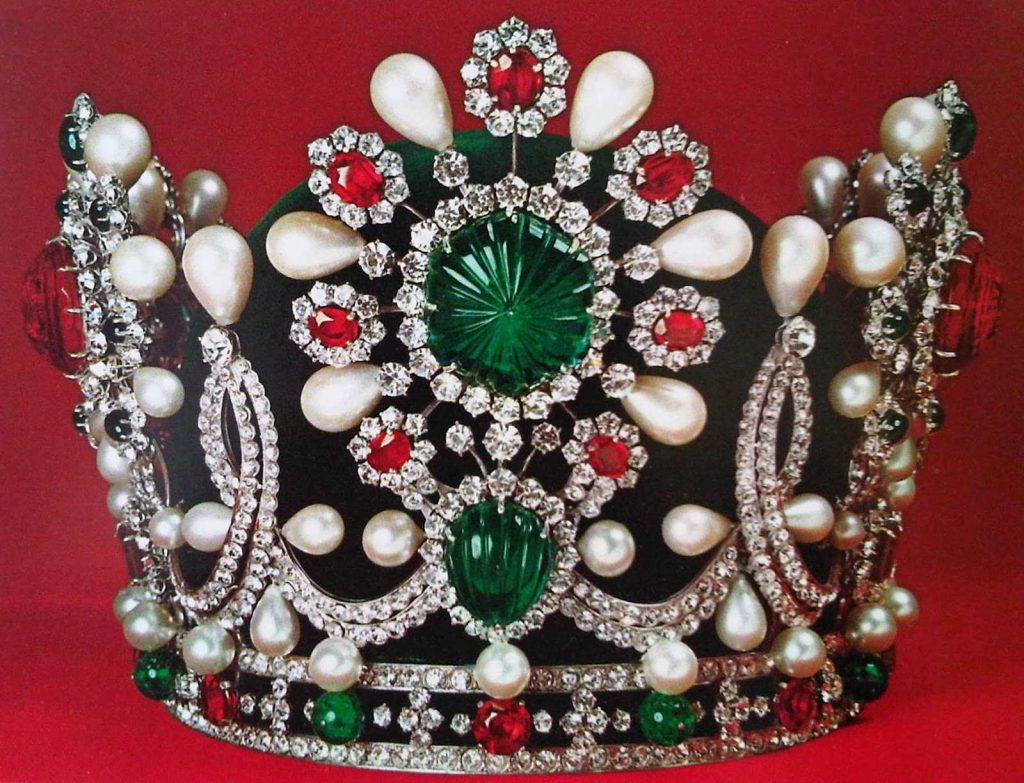