The cuisine of Iran is diverse, with each province featuring dishes, as well as culinary traditions and styles, distinct to their regions. It includes a wide variety of foods ranging from chelow kabab (barg, koobideh, joojeh, shishleek, Soltani, chenjeh), khoresht (stew that is served with white Basmati or Persian rice: ghormeh sabzi, gheimeh, and others), ash (a thick soup), kookoo (vegetable omelets), polo (white rice alone or with addition of meat and/or vegetables and herbs, including loobia polo, albaloo polo, zereshk polo, and others), and a diverse variety of salads, pastries, and drinks specific to different parts of Iran. The list of Persian recipes, appetizers, and desserts is extensive.

Herbs are used a lot, as is fruit from plums and pomegranates to quince, prunes, apricots, and raisins. The main Persian cuisines are combinations of rice with meat, chicken or fish and some onion, vegetables, nuts, and herbs. To achieve a balanced taste, characteristic Persian spices such as saffron, diced limes, cinnamon, and parsley are mixed delicately and used in some special dishes.

It is believed that rice (berenj in Persian) was brought to Iran from southeast Asia or the Indian subcontinent in ancient times. Varieties of rice in Iran include Champa, rasmi, anbarbu, mowlai, Sadri, khanjari, shekari, doodi, and others. Basmati rice from India is very similar to these Persian varieties and is also readily available in Iran. Traditionally, rice was most prevalent as a major staple item in northern Iran, while in the rest of the country bread was the dominant staple.

There are four primary methods of cooking rice in Iran:

Chelow: rice that is carefully prepared through soaking and parboiling, at which point the water is drained and the rice is steamed. This method results in an exceptionally fluffy rice with the grains separated, and not sticky, and also results in a golden rice crust at the bottom of the pot called tah-deeg (literally “bottom of the pot”). 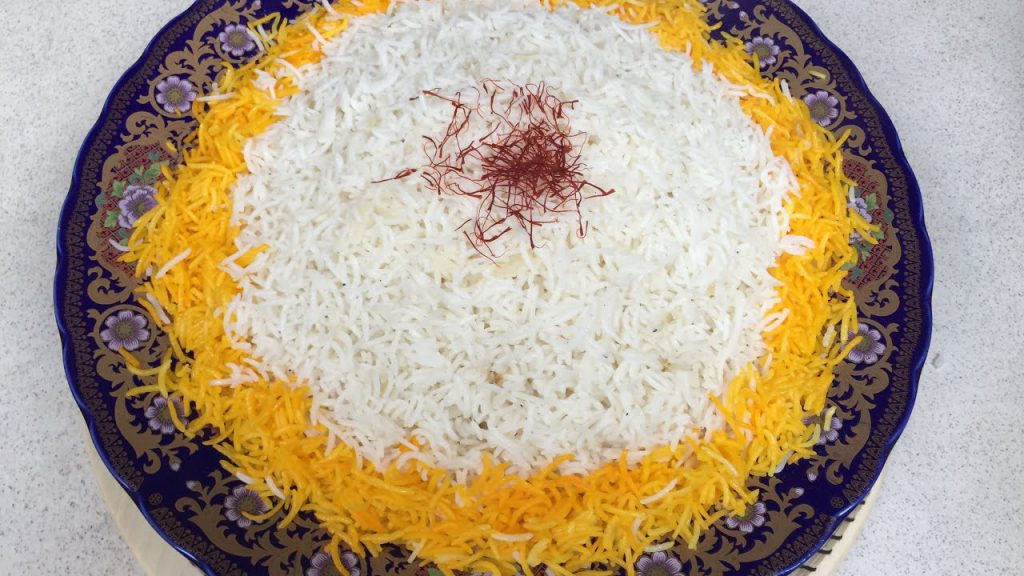 Pollo: rice that is cooked exactly the same as chelow, with the exception that after draining the rice, other ingredients are added in layers or sections of the rice, and then steamed together. 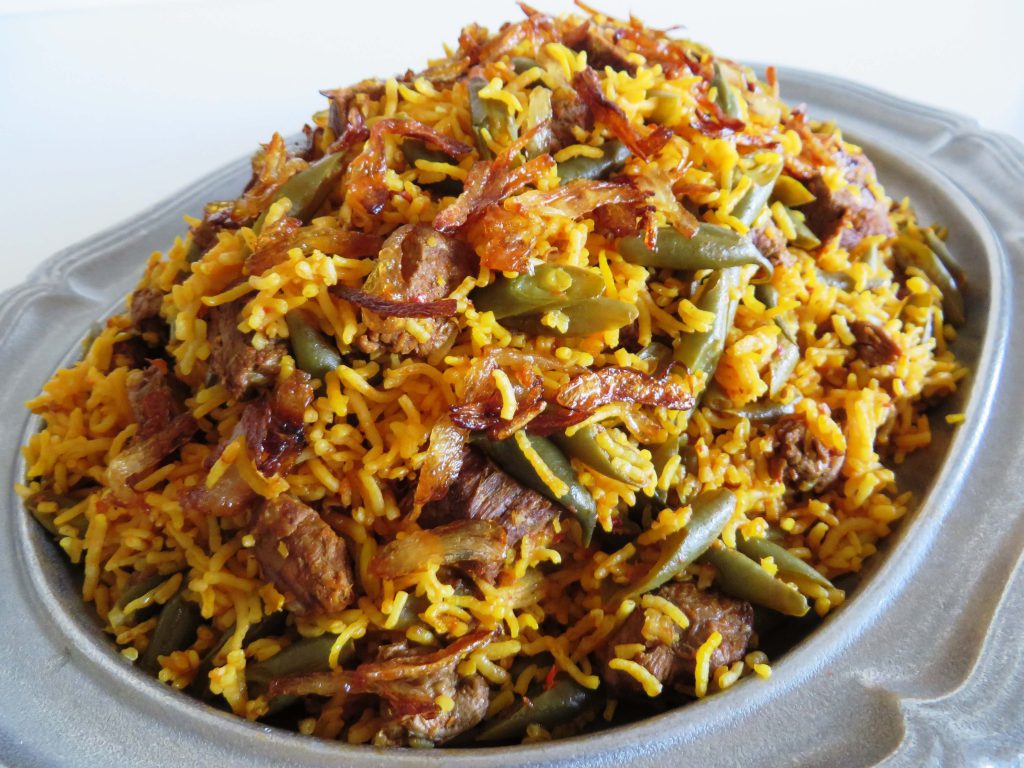 Kateh: rice that is cooked until the water is absorbed. This is also the traditional dish of Gilan (described in detail below). 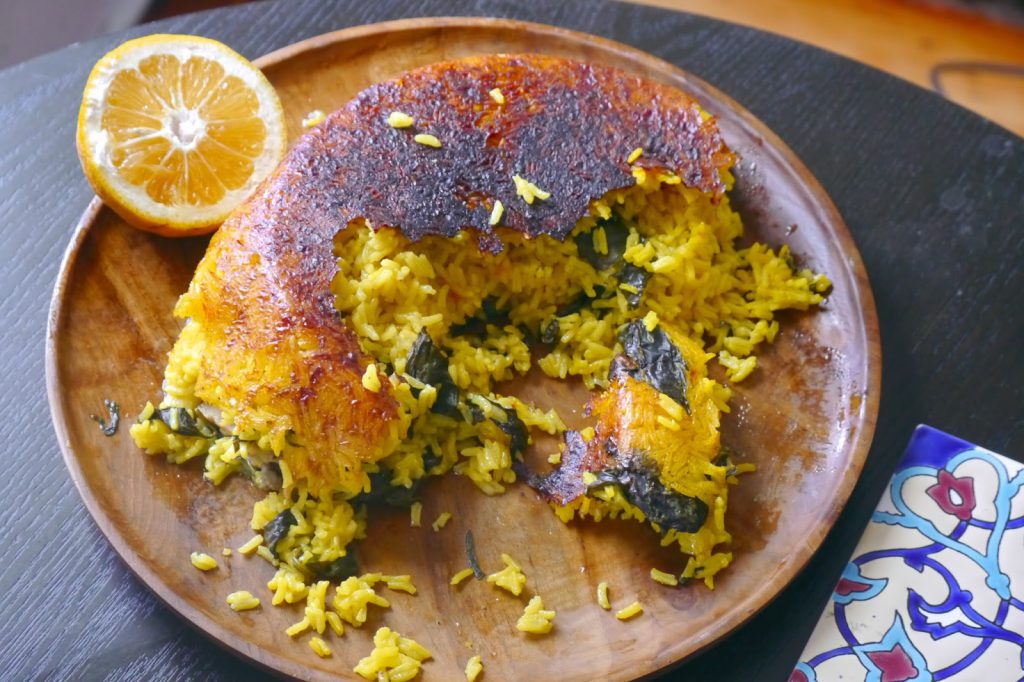 Damy: cooked almost the same as kateh, except that the heat is reduced just before boiling and a towel is placed between the lid and the pot to prevent steam from escaping. Damy literally means “simmered.” 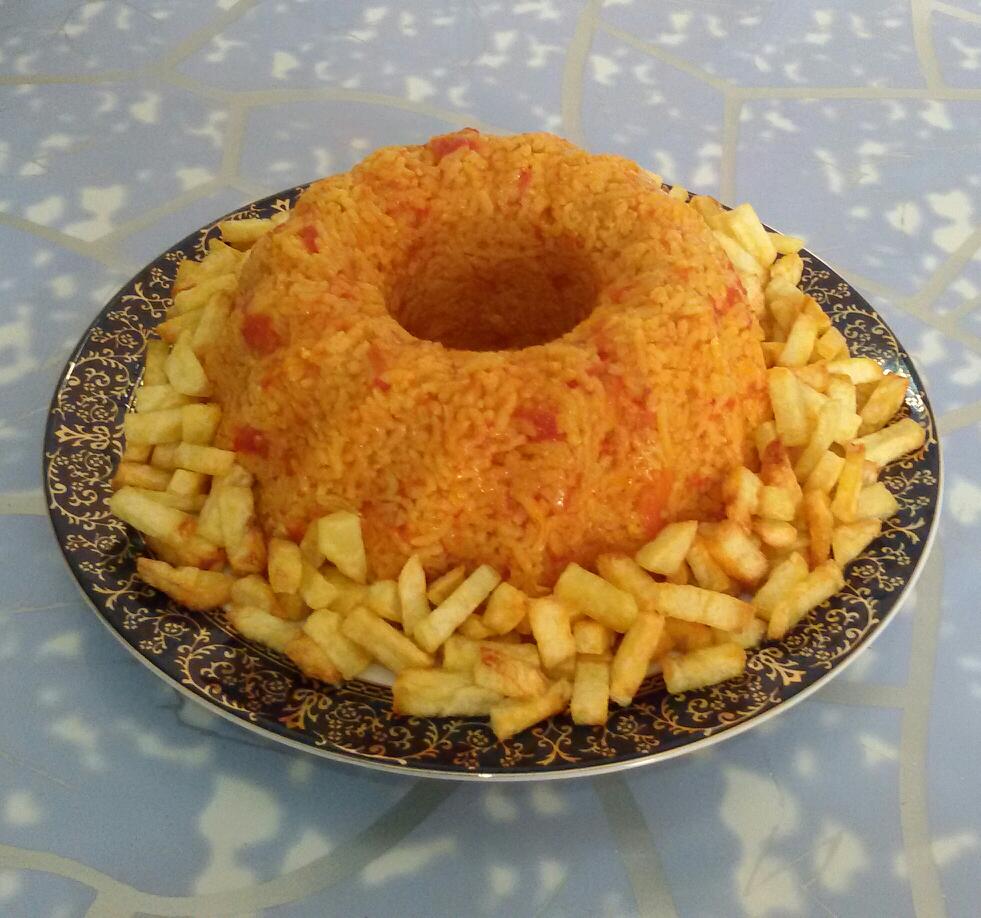 Lunch and dinner (naahaar or shaam)

Traditional Persian cooking is done in stages, at times needing hours of preparation and attention. The outcome is a well-balanced mixture of herbs, meat, beans, dairy products, and vegetables. Major staples of Iranian food that are usually eaten with every meal include rice, various herbs (mint, basil, dill, parsley), cheese (feta or Persian panir, derived from goat or sheep’s milk, and sometimes cow’s milk), a variety of flatbreads, and some type of meat (usually poultry, beef, lamb, or fish). Stew over rice is by far the most popular dish, and the constitution of these vary by region. Tea (chai) is the drink of choice on nearly every occasion and is usually served with dried fruit, pastries, or sweets.

You can usually find tea brewing throughout the day in most Iranian homes. Doogh, a yogurt drink, is also quite popular. One of the oldest recipes, which can trace its existence back to the time of Persian empire, is khoresht-e-fesenjan, consisting of duck or sometimes chicken in a rich pomegranate-and-walnut sauce that yields a distinctive brown color, most often served with white rice. 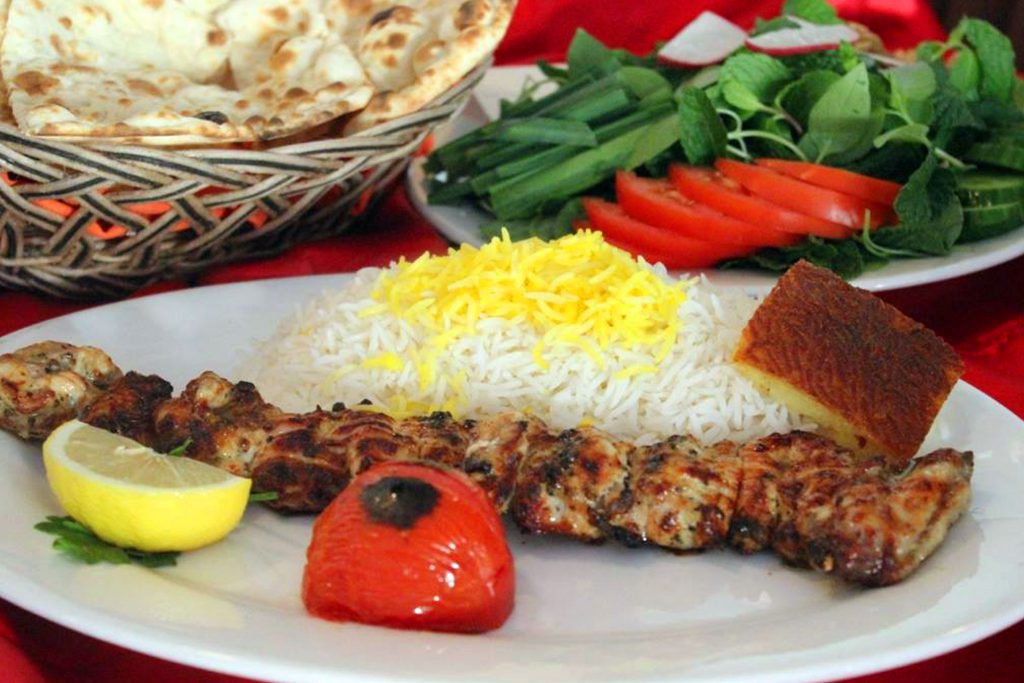 is a national dish of Iran. The meal is simple, consisting of steamed, saffroned basmati or Persian rice (chelow) and kabab, of which there are several distinct Persian varieties. This dish is served everywhere throughout Iran today but traditionally was most closely associated with the northern part of the country.

It is served with the basic Iranian meal accompaniments, in addition to grilled tomatoes on the side of the rice, and butter on top of the rice. It is an old northern tradition (probably originating in Tehran) that a raw egg yolk should be placed on top of the rice as well, though this is strictly optional, and most restaurants will not serve the rice this way unless it is specifically requested. Somagh (powdered sumac) is also made available, and if desired, only a dash should be sprinkled upon the rice.

In the old bazaar tradition, the rice (which is covered with a tin lid) and accompaniments are served first, immediately followed by the kababs, which are brought to the table by the waiter, who holds several skewers in his left hand, and a piece of flatbread (typically nan-e lavash) in his right. A skewer is placed directly on the rice and while holding the kabab down on the rice with the bread, the skewer is quickly pulled out. With the two most common kababs, barg and koobideh, two skewers are always served. In general, bazaar kabab restaurants only serve these two varieties, though there are exceptions.

The traditional beverage of choice to accompany chelow kabab is doogh, a Persian sour yogurt drink, flavored with salt and mint, and sometimes made with carbonated mineral water.

is a Persian style barbecued lamb or beef kebab. The main ingredients of Kabab Barg are fillets of beef tenderloin, onion, and olive oil.

is an Iranian minced lamb kebab/kabab which is made from ground beef (usually sirloin), often mixed with parsley and chopped onions. 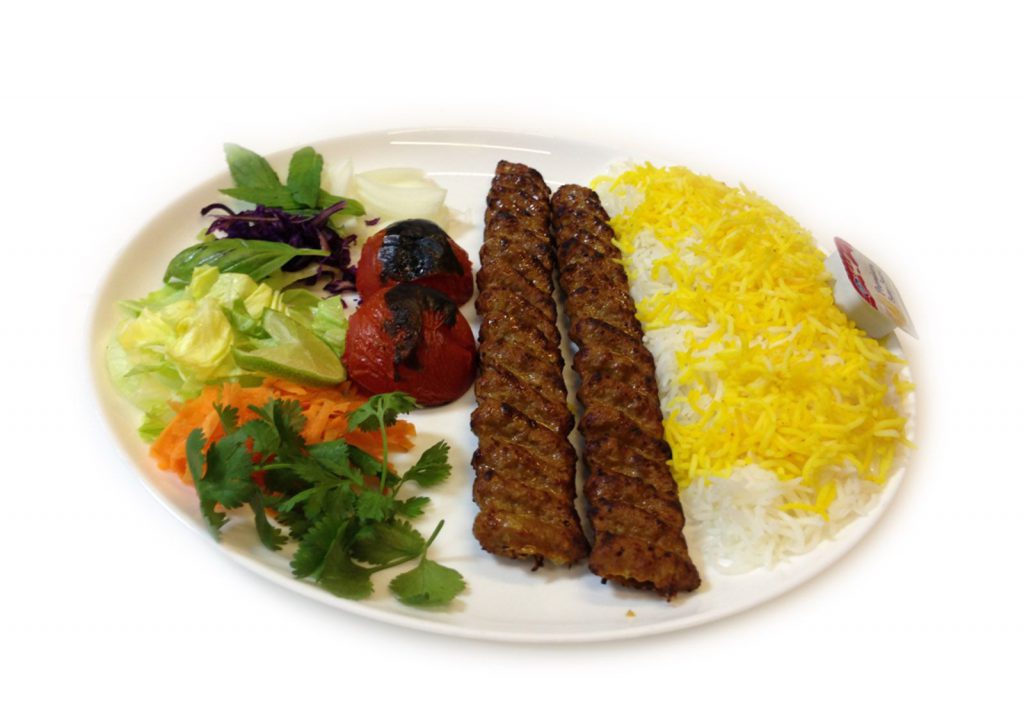 To cook Koobideh, first the meat is minced finely, then onion, salt, and pepper are added. These ingredients should be mixed well together for 15 minutes until the mixture becomes smooth and sticky. By keeping hands wet, indentations all the way down the skewer are made. At both ends should be pressed firmly to the skewer. The kebabs should be 20 cm (7-8 in) long.

also called Khoresh (Persian: خورش), is the common name of different stews in Persian cuisine which is typically served beside Polow (rice dish). In Persian cuisines, there are lots of different Khoreshs based on the different ingredients which are used. In comparison with Kebabs, typically it takes more time to prepare one of these Khoreshs and for most of them, the key components are their vegetables and not their meat, therefore they can be cooked for the vegetarian people also. Persian Khoreshs have some similarities with typical Indian curries, in terms of preparation. Iranian stews are different in that they use liberal amounts of saffron to give a very unique and fragrant taste. The most popular Khoreshs are Khoresh Gheymeh, Khoresh Ghormeh Sabzi, and Khoresh Fesenjaan.